While the Lannon area was mostly settled by Irish immigrants, the first settler families were Isaac Howard,and William Lannon they first came to the area in the 1830’s. Howard described this area as “The Valley of the headwaters of the Fox River.The 1840 census of the Town of Menomonee (which included future Lannon) had a total settler population of 59 people. By 1855 at least a dozen quarries were shipping stone to Milwaukee by team and wagon.  The Brogan Cabin was used to celebrate the first Catholic mass in Waukesha County in 1842.  The famous  and popular “Quarry”- Menomonee Park was developed into a swimming beach and fishing lake in the 1960’s, through the years multi trails have been developed for multi use, which connects to the Bug Line nature and recreational trail.

The Lannon post office has a long history dating back to 1854.  The first major road was built and surveyed in 1844-45.  The Bug Line RR tracks came through in 1890

Lannon was incorporated in 1930. The first Village Constable was elected in the same year. The LannonVolunteer Fire Company was started in 1916. Lannon has been recognized as the Baseball Capital of Waukesha County, with a long history in the Land O Lake leagues. We invite you to come and visit our quaint and charming Village, that has a strong sense of community. 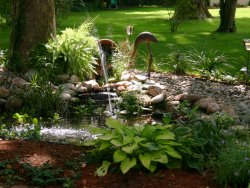 Attractions in or near Lisbon