Prior to settlement the Town of Vernon was composed of sugar maple and white oak forest, savana and marsh from which the Potawatomi derived food, medicine, shelter, tools and fibers. On Nov 1, 1836 Prucius Putnam, John Dodge and brothers Curtis & Orien Haseltine, Jr. arrived from Vermont and built a log hut near present day Hwy L & Maple Ave. They named the area “Vernon”.

The prairie soil was turned under for farming. The maples were tapped for sugar & used along with oak & black walnut, to build houses & plank roads. Allen Haseltine was the first settler child born here in 1838.

A highly crafted cobblestone home was created in 1842.

The Vernon Reformed Presbyterian Church arose in 1854. In 1857 the Waukesha County Poor House began its 40 years of service by accepting an abandoned child. In 1896 various churches, grocery stores, 7 cemeteries & 6 post offices had been establishment in Vernon. 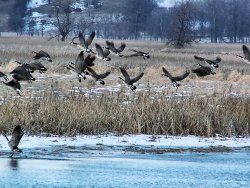 Attractions in or near Vernon

No entries were found.