North Prairie is a village in Waukesha County, Wisconsin. As of the 2000 census, the village had a total population of 1,571.

North Prairie is located about 3 miles west of Genesee and Genesee Depot near Hwy 59 and Hwy E. Three men from Mukwonago, who were on a prospecting tour, named the town in 1826. The first settlers were Mr. Denny and Chas. Raynaus, blacksmiths from Eagle, who arrived in 1837. The first claim was by Stillman Smith, the first settler of Genesee Village. Raynaus started the first school in 1840 in his house. There was a store and post office by 1850 and the Milwaukee & Mississippi Railroad in 1852. North Prairie became one of the region’s important commercial and residential centers. In 1877 St. John’s Lutheran Church was built and still stands today. Around 1920 when some communities were beginning to decline, North Prairie experienced a growth due to the Morey Milk Condensery, which opened in 1917. The plant was sold in 1924 and is no longer in existence. North Prairie incorporated in 1919 as a separate government entity. 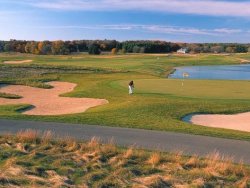 Attractions in or near North Prairie