Genesee Depot was settled predominantly by the English, Irish & Welsh and became a thriving settlement when the Milwaukee & Mississippi Railroad laid tracks through the area in 1851.

Many of the buildings standing today in Genesee Depot date back to the 1800’s and help the area retain the charm of that earlier period, including the original section of St. Paul’s Catholic Church (Hwy 83 & D), built in the early 1870’s; the James Proctor House (Hwy 83 by bridge spanning Genesee Creek) also dating back to the 1860’s, behind which stood the Genesee Woolen Mill; and the new railroad depot built in 1897 after the first one burned down.  This station building was relocated slightly south of where it originally stood on Hwy 83 and serves diners today as the Genesee Depot Café.  The Cafés interior walls are decorated with historical photographs and memorabilia showing earlier times and people. 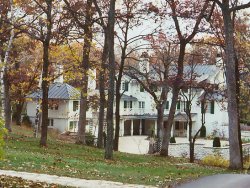 Attractions in or near Genesee Depot

No entries were found.