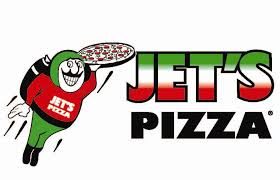 Since opening their first pizzeria, Jet’s® has been selling pizza, submarine sandwiches and salads that have been pleasing the palates of people everywhere. But the single menu item that Jet’s Pizza® has become famous for, above anything else, is their signature deep-dish square pizza.  Jet’s Pizza® only uses the highest quality ingredients; they have built their business, their reputation, and their taste on keeping it that way.

“There are a lot of ways out there to make cheaper pizza. Jet’s® is about better pizza. That’s why we have never skimped on the product or the ingredients, and never will,” says Eugene Jetts. “As soon as people get a slice of Jet’s Pizza® into their mouth they notice something different,” he adds. “They notice it’s better.”

While the quality and taste of the food is number one for Jet’s Pizza®, there is also a simple belief throughout the company: “Pizza should be fun,” says John Jetts. “If you’re eating one of our pizzas and you don’t have a smile on your face, then something is wrong.” That fun attitude can be summed up in the company’s simple slogan, says Jetts, “Life is short. Eat better pizza®” That is something that Jet’s Pizza® is betting that people across the nation will agree with. They’ve found that it is working so far.